Why do Filipino's think that Philippines is powerless in International Relations? 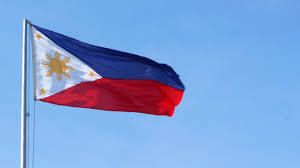 Decades until now, Most Filipino still believe that the Philippines is a weak country. This is partly because of the long history of the Philippines as a colonial state.

But why do many Filipinos think we are still a powerless country in the face of international relations?

Are we really dependent to other nation? Or is it because of  what we've known since we were young?

Well, recently I spoke to a Political analyst and Economics expert, Mr. Calixto Chikiamco. He eventually shared  his thoughts with me regarding the Filipino mindset about International Relations.

“ I think we have gotten used to this idea that we are a small victimized country and by extension, we're some kind of a David versus the Goliath throughout history,” He said.

According to Mr. Chikiamco, Filipinos are too enamored with the outdated view of themselves as a small country.

Economically, the Philippines is no pushover either. It is among the world’s 40 largest economies and is expected to breach the 20th spot within this generation.

“The idea of being a small country kind of feeds into our national identity as a small victimized country but nonetheless feisty—palaban.”

The Philippines is considered an 'Emerging Middle Power,' and that's something to be proud of.

No less than the Hague Center for Strategic Studies (HCSS) considers the Philippines as one of the influential countries not only in Southeast Asia, but the whole world. It groups the country together with Turkey, UAE, Saudi Arabia, and Ukraine as some of the world’s “emerging middle powers.” In fact, the Philippines ranks higher than these countries according to the HCSS diagram below. 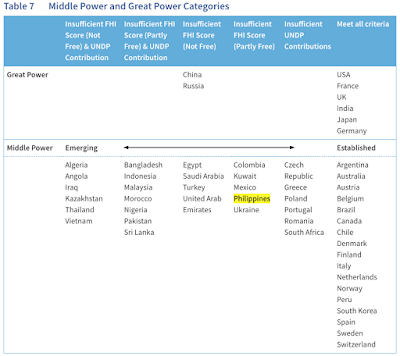 If this were to be believed, it means the Philippines is more powerful than neighbors Indonesia, Thailand, Vietnam, and Malaysia.

According to Chikiamco, power in international relations is not just about raw power or military power.

“Being a middle power is not only about the military and raw power, but it's also about soft power, it’s about our role international institutions, and I think the Philippines has done a great job as one of the core framers of the human rights doctrine in the United Nations,” he said.

The Philippines has a very strong voice in international relations.

The Philippines commands one of the most powerful voices on the world stage, not just in recent years but since the founding of the United Nations. Ever since the creation of the U.N. in 1945, the Philippines has been a very vocal, influential, and valuable asset as a member.

In 1948, after a disagreement during the third U.N. General Assembly, the Soviet Union (USSR) top diplomat Andrei Vishinsky approached Romulo and belittled him and the Philippines.

“You are just a little man from a little country,” said Vishinsky.

“It is the duty of the little Davids of this world to fling the pebbles of truth in the eyes of the blustering Goliaths and force them to behave!” said Romulo. Vishinsky walked away.

The Philippines also enjoys a significant amount of international prestige or how other countries view it and its opinions.

The Philippines is highly respected by other nations.

At the U.N., the Philippines has a very long track record of standing up for children’s rights, women’s rights, and migrants’ rights.

It is also one of the few nations that send peacekeeping forces to conflict areas around the world. Because of these, other nations view the Philippines as a responsible and highly respected member of the international community.

“From our contributions to U.N.’s Founding Principles and the Universal Declaration of Human Rights to our co-founding of the ASEAN and commitment to peacekeeping operations in conflict zones and decades of proactive democracy advocacy, the Philippines has been a significant contributor to the liberal international order in ways even our own leaders and folks sometimes tend to under-appreciate,” said Chikiamco.

The Philippines is not a great power, but it is certainly not a small power.

“Just as we steadily develop our hard power base, let’s not forget how much soft power we already have at our disposal,” concludes Chikiamco.
Published by:

at September 19, 2020
Email ThisBlogThis!Share to TwitterShare to FacebookShare to Pinterest
Labels: Politics